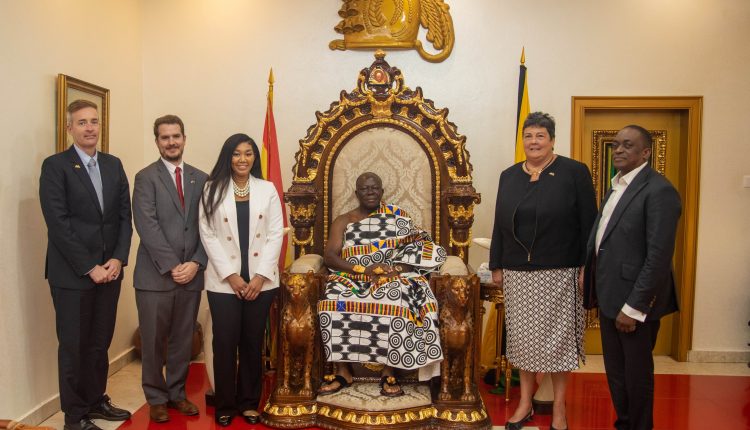 In welcoming the US Ambassador, Virginia E. Palmer, to Manhyia, the Asantehene acknowledged the economic drivers for illegal mining operations but said that should not substitute the environmental destruction.

The king of the Ashanti Kingdom Otumfuo Osei Tutu II affirmed that chiefs could not be accused of allowing illegal mining to succeed in Ghana.

According to him,  licences are issued without recourse to the traditional authorities to the miners.

He again stated that Security Agencies should be questioned about the failure of successfully fighting illegal mining in Ghana.

He blamed the leadership of Ghana for failing to tackle galamsey.

“In Ghana, chiefs don’t issue permits and licences for mining. Those are issued from Accra and it is done without consulting the chiefs.

“The law says the state holds the land in trust for the people and so determines those things. How can a chief supervise when he has no control over the licence and who should mine and how it should be done?

“At the district level, we have the political administration – the district chief executive and the security council. Are they all saying that they are unaware of the activities of these galamseyers?” Otumfuo questioned.

The Asantehene underlined that if the political leaders could not stop illegal miners from operating, then they were not up to the task of leading.

“If they are unable to detect and stop the operation of these galamseyers then they are unworthy to be there, it is as simple as that,” he highlighted.